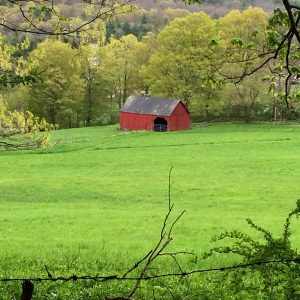 Recently I had the pleasure of Walking the Poem–landscapes  in Hardy, Dickinson, Ammons, and others–with the poet Hilde Weisart.  We studied the landscapes of more contemporary poets, too, including Maurice Manning and Jane Kenyon.  Our workshop, “Walking the Poem,” took place on the lovely, leafy green campus of Simon’s Rock College in Great Barrington. Here are some of examples of poems on walking and my reflections about them.

“Landscape,” Rebecca Solnit has written, “invites, inspires, and liberates the imagination.”  It gives us “places to think longer, more uninterrupted thought or thought to a rhythm other than the staccato of navigating the city.” Poets have known this at least since they wandered the Lake District and English moors in Wordsworth’s time; city flaneurs of Paris, know it equally well. The poet Maurice Manning in his book-length poem A Companion for Owls, writes (in the voice of his persona Daniel Boone),

If you walk around the woods enough,
you start thinking; your mind wanders
just like your feet, just like your eyes,
flitting from one thing to another—
ground to sky, bug to leaf, sun to shade—
it makes you happy and for a moment,
you stop to wonder why.

Natural landscape is often as central to poem as emotional landscape is to poet.  Observing landscape, the poet’s perceptions of the outer world mingle with her own mental and bodily feelings at that moment. The early 20th C. Russian poet Osip Mandelstam does this brilliantly in a three-line poem, as the street mirrors his own tousled state upon just waking.

Morning, a grey swallow raps, at the window,
and lethargic day, like an ox waking in straw,
stirs on the streets, tousled by long sleep.

We possess a landscape with our gaze. But the reverse is also true.  Landscape takes hold of us, takes us into itself, as anyone who is witness to violent crime knows. Emily Dickinson (#32) is so enveloped by an autumn landscape that she imagines herself not an observer, but one with it, just another tree or berry bush, and so must look her part.

The morns are meeker than they were—
the nuts are getting brown—
the berry’s cheek is plumper—
the Rose is out of town.

The maple wears a gayer scarf—
the field a scarlet gown—
Lest I sh’d be old fashioned
I’ll put a trinket on.

The co-mingling and entwining of poem and landscape takes a somewhat different direction in the wonderful poems of the mid-Twentieth century American poet A.R. Ammons. In “Strolls,” walking by a brook in the mountains, Ammons encounters features of the landscape that become the interlocutors of this shy, reserved man: The sand, falls, furrows, and bluffs are companionable perhaps in a way that people, who have a tendency to become unreasonable, are not.  He “talks” with them, using a non-verbal language he shares with nature.

alone, I’m not alone:
a standoffishness and reasonableness
in things finds
me or I find that in them:  sand, falls,
furrow, bluff—
things one—speaking things
not words—would
have found to say.

The intermingling of outer and inner worlds is the beginning of metaphor—that is, of poetry. Inner and out states make two elements; the landscape of the past and its myriad associations, makes a third element in walking poems. For Thomas Hardy, in “The Walk,” landscape and poem are fused. The outer world mirrors the new inner world of grief  when his  wife Emma dies. “You did not walk with me / of late to the hill-top tree,” he writes, and goes on, “and I went alone, and I did not mind,/ not thinking of you as left behind.” Emma Hardy’s irretrievable absence, her death, has become a tangible presence to the poet, in a way that her absence-in-life was not.

I walked up there today
just in the former way;
surveyed around
the familiar ground
by myself again:
what difference, then?
Only that underlying sense
of the look of a room on returning thence.

Memory and History in Landscape

Walking alone in late winter, the poet Jane Kenyon recollects a time of anger and dissension that send her “hurrying home”: “the wind is keen coming over the ice; / it carries the sound of breaking glass. / And the sun, bright but not warm, / has gone behind the hill. . . “ (“Walking Alone in Late Winter,” from The Boat of Quiet Hours, 1986.) Associations with the past need not be solely personal, but can be historic, as they are for Yeats in his famous poem of the Easter uprising. Another Irish poet, Paul Muldoon brings in the patron saint of Ireland in his walking poem “Clonfeacle” (an Irish place name):

It happened not far away
In this meadowland
That Patrick lost a tooth.
I translate the place name

As we walk along
The river where he washed
That translates stone to silt.
The river would preach

As well as Patrick did.
A tongue of water passing
Between teeth of stones.

When we walk into the landscape, not just observing it, how much more do we possess it, and it us? Movement into a space is assertive, and may become a form of trespass. With our bodies we define a perimeter, mark the frame of the scene before us. In “Walkers,” I write

Walking rotates pelvis,
so arms and shoes slice
an air shared by trees and storefronts,
by strollers and dogs and parents.

In my walking poem “Shelter Cove” oak tree and Uncle Knowles’ cattle and the walkers are intertwines. When the poem begins the walkers are young sapling-siblings walking many miles to their Uncle’s cattle ranch; at the end of the poem, attending the Uncle’s funeral, they, too, contemplate the branding-to-bone of death, the passage of every living thing. The long-lived oak crowns them as an emblem of enduring nature.

Our rituals
are walking, sapling-siblings,
from Shelter Cove to the Mattole,
to our tall, grizzled great-uncle’s
winter wheat fields barely topside,
walking and skirting the shoals below
the old light house, that, and racing
the rising tides.

Oak trees
cluster inland by the laurel,
by the springy, pungent pine-boughs
for our bedding, Eel Kakonee
for our meals; mile on mile, we tread
the beach to the cedar house,
Knowles’, the uncle we hardly know,
the homestead.

Description is never simply description in the walking poems we read here. A whole history or philosophy may be found in a landscape, and implied in its description. Consider the attitude toward the world implied in Taylor Graham’s deceptively simple description of nesting birds in his poem “Chances”:

These are the birds who nest
in our chimneys,
bundling combustibles
where the draft
sucks flame. Or,
in a ramshackle weave
of sticks and string,
hang their breakable young
on a high thin twig
over nothing.
and if the birdlings grow
to any weight and feather,
they show them, by flapping
of parent wings,
one has only to outstep the edge
to fly.

Birds, in Graham’s poem, do not gather twigs and bits of grass to build their nests; they gather combustibles, and they place them “where the draft / sucks flame”—seeming to seek out the most dangerous, flammable spot. Or they situate their nests not in lovely budding spring tree, but “on a high thin twig / over nothing”, again inviting danger.

Most of us are familiar with Thomas Hardy’s much anthologized poem “The Darkling Thrush”, featuring an aged bird, “frail, gaunt, and small,/ in blast-beruffled plume” who flings “his soul upon the growing gloom” and thus sends out vibrations of “some blessed Hope, whereof he knew / And I was unaware”.  Half a century later, the relative safety of the Victorian Age well in the past, another British poet Basil Bunting describes the same familiar bird in quite a different way:

A thrush in the syringa sings.

The poems we have looked at so far are well crafted, workmanlike poems. They do not aspire to be works of genius. But that doesn’t mean you shouldn’t show your genius, if you are so included. By this, I mean: be as original as you can, be wild, push the limits in your writing.

There is no nature in eternity, no wind shift, no weeds.

Poems locate disturbance, confusion, or pain in landscape’s emptiness. Wright takes what would usually be the foreground—the hawksbane flower of his title—and moves it to the background, bringing forward all that is not, that cannot be said about hawksbane, or nature, or himself, and makes that the poem’s subject, much as Hardy made Emma’s absence the felt  presence of his poem “The Walk.”

Looking with our eyes is a kind of possession. When I look at a landscape, I take it into my memory and thoughts. It is mine to consider and remember.  When we walk with a poem in mind, we allow the mind and feet to wander. The rhythm of your walk may be mirrored in the rhythms of the poem: Is it quick, staccato, slow, ponderous, measured, happy, confident? Walking rhythms may enter and shape your writing, much as your inner states mirror and are in turn mirrored by your surroundings. (Is it raining in your heart as it rains on the town?) The world of the walk is the surface of a pond; you toss in a pebble, and it disturbs the surface, new things become visible. For Thomas Hardy, his walk on a certain day called up an intense feeling of loss; for the poet Jane Kenyon, a walk calls up an old grievance that sends her “hurrying home.”

Human elements are a part of most walks and most landscapes, and may evoke historic or mythic associations, as a certain place name on a walk evokes the patron saint of Ireland for the poet Paul Muldoon. Other associations in a walking poem may be to the ordinary, everyday things in the poet’s surroundings, as in Janet Lewis’s poem, “Remembered Morning.” Poets often use imagined or historic figures to bring a landscape and place alive in a poem. Maurice Manning does this with his personification of Daniel Boone. The poet Cesare Pavese, not discussed here, charges his landscapes with various figures, including a hermit—wearing “nothing but goatskin,” and giving off “a musk of animal and pipe / that has soaked into the land”– in “Landscape I” (translated by Geoffrey Brock in Disaffections: Complete Poems).