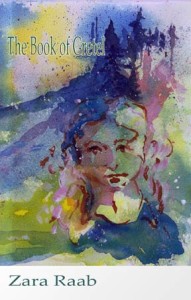 These beautiful, unsettling poems proceed with dreamlike assurance through a landscape fully-imagined and brilliantly described. In Raab’s transformative retelling of the folk tale, the northern forest itself joins Gretel as a central character: it is a dripping, fog-bound wilderness, a place where “the promises of rain are kept” and homelessness becomes a metaphor for our abiding state of being.

The Book of Gretel gleams like a coal in a dark forest, a poetic story of loss, death and despair, and being found. It exists in those dream fragments that must have preceded the fairy tale of Hansel and Gretel. It is personal. It is lovely, exotic, set in the northern coast of California among the redwoods and the rain.

This new embodiment of Gretel may transport her tale and its characters to the woods of the northern California coast, but it is as wild and weird and haunting as the original. In Zara Raab’s strong hands, this becomes a story of identity, of being forsaken and being found, of learning to live as an outcast while not abandoning the possibility of returning home. The Book of Gretelis a stirring poetic series and an impressive first collection.