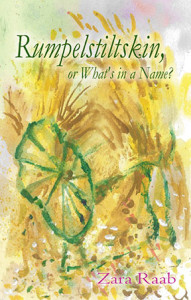 Rumpelstiltskin, or What’s in a Name? paper $14
Order online at http://www.finishinglinepress.com/ and click on “Bookstore”
—Finalist for the Dana Award
—”Magic!” —Kit Duane

A review by Brooke Harris of Rumpelstiltskin can be found in The Mom Egg.

And a review by Katherine Yets appeared in Verse Wisconsin.

Zara Raab’s narrative poem “Rumpelstiltskin, Or, What’s in a Name?” adapts that fairy tale (so frightening to women) and leavens it with notes of humor. But the bass note is serious. In Raab’s and in the old narrative, the nascent feminine strength of a girl on the cusp of womanhood is subverted by masculine values:  To aggrandize her father and appease the king, the miller’s daughter, who should be spinning the flax of the field into linen—in a hallowed cycle from the bounty of the fields to the ‘knitting up’ of that bounty—instead is forced to spin “the tendons of scarecrows scavenged” into gold, a false, cold commodity.

Raab’s figures are archetypes, political in that they illustrate the age-old gender power structure.  But she also imagines the personal–colloquial hints such as ‘His girl—what’s her name?—could spin pinto beans into linen” and “Grownups she guessed did strange things–/leaving like ma, or dying….So she did not make a fuss/or raise a hullabaloo.”

Raab’s most poignant narrator is the miller’s wife, who along with the miller relinquishes their daughter to be damaged and then is at best a hovering consciousness struggling to articulate how things went askew—from the moment she and her husband “like the stones that sift and grind the emmer” ground together to produce “the flower [flour] daughter.”The Rumpelstiltskin figure is a complex attempt at generative power (to un-spin his riddle is to spin the self), and Raab hopes that his spell can be lessened by the language of poetry, whose power is to let us see the truth we instinctively know. The daughter is forced into a troubled womanhood, in which her child, born of a facile relationship with the king, is not allowed to be the one thing she might keep for her own.  She must, like all heroes, go on a quest for self in which she is broken to her core and, by hard-won knowledge, re-built–so that she and her (recovered) son can claim the kingdom.

Buy the book on Amazon!