Handstands through the Universe A.R. Ammons mentions “Conserving the Magnitude of Uselessness” an interview as a poem he considered, along with “If Anything Will Level with You Water Will,” among his two best. “Casadilla Falls” or “Corsons Inlet” are easier poems, surely, but “Conserving the Magnitude” is a marvel of invention, behaving at first […]

As full of “luxuriant ornamentation”[1] as a Frederik Chopin Mazurka or Nocturne, Gjertrud Schnackenberg’s eight-poem sequence from her 1985 book, The Lamplit Answer, is both tribute to Chopin’s music and mimicry of his aesthetic. With her strong poetic personality and unmistakable verse topography, it’s no surprise Schnackenberg is drawn to Chopin’s own singular and distinctive […]

Jack Kerouac coined the phrased “Beat Generation” in 1948, the year Jack Foley opens his chronology of West Coast poetry, his rich syllabus of literary, political, and sociological texts that define a bygone era. Nineteen-forty-eight was seminal in other ways, as well, announcing the publication of Kinsey’s Sexual Behavior in the Human Male and Ezra Pound’s Pisan Cantos (New Directions). T.S. Eliot won the Nobel Prize, Denise Levertov emigrated to the U.S., and William Everson, whose The Residual Years was newly published, became Brother Antoninus after speaking with God. The following year, Marcel Duchamp lectured at the SF Museum of Art and the Hungary i opened. A new radio station, KPFA, began broadcasting Jarmie de Angulo’s Indian Tales. DH Lawrence came out with his Selected Poems (New Directions), with an introduction by Kenneth Rexroth, who took the metrics of Hopkins and Bridges to task, and dismissed the idealized, stilted ways of writing of old masters like Thomas Hardy and Matthew Arnold. “Sermonizing,” he called it.

Saddened to hear of the death of the poet Chana Bloch earlier this year, I have been rereading her poems, some of which I reviewed in Poet Lore (“Chana Bloch’s New World,” a review of Blood Honey). In remembrance of her and her poems, both original and translations, I am reposting an interview I did […] 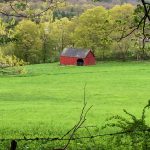 Recently I had the pleasure of Walking the Poem–landscapes  in Hardy, Dickinson, Ammons, and others–with the poet Hilde Weisart.  We studied the landscapes of more contemporary poets, too, including Maurice Manning and Jane Kenyon.  Our workshop, “Walking the Poem,” took place on the lovely, leafy green campus of Simon’s Rock College in Great Barrington. Here are […]