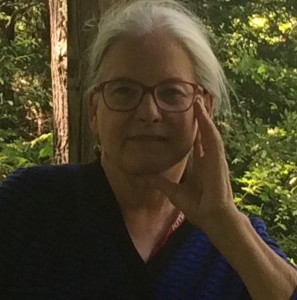 “Rhyme, along with other intelligible repetitions of sounds, is often the symptom or indication that the poem is quickening.”

Modernist poetry especially in America places a high value, perhaps the supreme value, on originality. Influenced by the highly expressive visual arts of early and mid-century, some poets began to see the page as a field or canvas. The poems become gorgeous, full-blooded stallions and mares, the poets, mounted cavalry. Here’s an example by the wonderful A.R. Ammons in a poem called “Play.”

Nothing’s going to become of anyone

liberates us to the

apple branch for example in bloom—

it’s been taken care of:

The repetitions of rhyme and meter would be utterly lost here, trampled underfoot. In our foray into formal work, we are the foot soldiers. There could be no contest between cavalry and foot soldiers! We may cringe at stale rhymes, the rhymes of old greeting cards, but still find freshness—originality!– in subtleties of rhyme and meter; we delight in half rhymes, slant rhymes, rhymes by consonant or vowel or end syllable, internal and end rhymes. We notice our poems come alive in voice and speech, our sound sensitivities awake (and visa versa). We delight, too, in exploring the nuances and flexibilities of various forms and meters.

At any rate, this is my experience. In 2011, I published in the Evansville Review a small poem called “Billy Gawain” that had these final lines:

He had no kin, so he was buried

with our own, the only name he bore

the name we gave him and had chiseled

on his headstone at the spring solstice:

“Bill Gawain, A Stranger to Us.”

It was a turning point in my struggle to find an authentic voice and tell my story. Working in rhyme and meter, I got down from my horse and walked. I have only the rhythms, muscular power, and skeletal awareness of my own body to carry me in and through the poem-making. In the best circumstances, I’m flexible, subtle, delft; my creative motions are small, but precise and well-aimed. In the best circumstances, I give long thought to my approach, and to the means I will use to slay the foes– incoherence or silence or miscomprehension– that threaten to besiege me. For these proceedings must begin with foe. We are not about sauntering into the back garden and idly strolling back and forth; we are tense, posed, alert. There is a question, a challenge, a danger. That is why we marshal pen and paper, notebook and pencil, keyboard and mind.

We ‘ll begin with trimeter poems, and 4-34-3 ballad measures. Further on, you’ll find some examples from my library, though I’m sure you have your own. Mine are poems written mostly in 3-beat lines by Philip Larkin, James Merrill, and W.B. Yeats. These poems give us possibilities for composing your own three-beat or ballad quatrain poems. Each possibility varies by rhyme scheme and my stanza length and variation in line. But the poems also vary in terms of what they seek to accomplish, whether lyric expression or story-telling narrative.

First, compare Ammons’ “Play” with another poem about a child’s toy, “Tops,” by Philip Larkin. Notice the restraint and reserve in the measured lines, formed into 6 quatrains, rhymed abab, cdcd, etcetera, until the final stanza, rhymed abba, in an embracing line that gives closure. The line length is unusual for Larkin, who most often wrote in a much longer line; this may explain why he chose not to break the stanzas into quatrains. Perhaps, too, he was thinking of the visual effect created by the long, skinny poem, suggesting perhaps a spinning top.

Squirm round the floor

Then draw gravely up

They are soundless, asleep,

So they run on,

Until, with a falter,

Their pace starts to alter:

As if hopelessly tired

They wobble, and then

The poise we admired

–And what most appals

Is that tiny first shiver,

We know beyond doubt

They have almost run out

And are starting to die.

I appreciate the skill of Larkin’s rhymes, which seem to flow effortlessly, partly from his dexterity with syntax. As an example, the second sentence in the poem reads this way as prose, and skillfully so! —

“So they run on, until, with a falter, a flicker—soon gone—their pace starts to alter: Heeling again, as if hopelessly tired they wobble, and then the poise we admired reels, clatters and sprawls, pathetically over.”

Notice, too, that though the ostensible subject is a child’s toy, the lines are stately. The trimeter is, after all, half a hexameter, the meter of epics and memorial poems, and some of that quality lingers:

Squirm round the floor at the beginning,

They are soundless, asleep, moving, yet still.

Larkin uses the line skillfully to tell a story, the life-line of the top, as it were. But the line can also be used to express lyric content, of course, as we can see in “Paul Valery: Palme” a poem by Valery translated by James Merrill. The first two stanzas of Merrill’s poem are below. The poem uses an unusual, inventive rhyme scheme. As you can see, each 10-line stanza is essentially two quatrains with a couplet embedded in the middle. The first quatrain rhymes abab, followed by a couplet, cc, followed by a second quatrain rhymed cddc. The latter rhyme scheme is sometimes called an embrace, as if the ‘c’ endings were embracing the dd couplet. Couplets are said to compel the reader to follow them, more insistently than an abab rhyme. (Maybe that explains why some readers and some poets don’t care for them!)

Beauty and its blaze,

And cool milk at my place.

Of prayer; I lower mine,

Feel the whole weight a palm

However its boughs yield

In bondage to thick fruit,

Wonder and see it grow!

Merrill, too, mostly wrote in a longer line. W.B. Yeats, in contrast, often wrote in the three-beat in; as Helen Vendler has taught us, he was perhaps the first English language poet to explore the possibilities of this line for story-telling and lyric, and in his hands it became a more versatile, flexible form than ever before.

In “The Wild Swans at Coole,” in the stunning first stanza, he adds two rhyming 4-3 lines (a couplet) to the usual four-line, 4-3-4-3 ballad quatrain.

The trees are in their autumn beauty,

The woodland paths are dry,

Under the October twilight the water

Upon the brimming water among the stones

This famous stanza beings rhyming abab, so we are draw into it without pressure; there’s an enjambment between the third line and the fourth, and the final two lines, which Vendler finds “soothing” (such a good word!) rhyme as a couplet and so close the scene. I like to compare Yeats’ inventive ballad with an anonymous ballad from around Shakespeare’s time, one that Harold Bloom is fond of discussing. Here’s just the first stanza—well, two quatrains 4-3-4-3, rhyming abab, plus a refrain:

From the hag and hungry goblin

That into rags would rend ye,

The spirit that stands by the naked man

In the Book of Moons defend ye,

That of your five sound senses

You never be forsaken

Nor wander from yourselves, with Tom,

Abroad to beg your bacon.

While I do sing “Any food, any feeding

Come dame or maid, be not afraid:

Poor Tom will injure nothing.

After almost 30 years of working with “his enormous tenacity and his unremitting inventiveness” (Vendler), Yeats wrote “Easter 1916,” his great poem of the Irish uprising in the Time of Troubles. Below are the first two stanzas. Vendler calls the poem a ballad, the only ballad of Yeats to become a part of the popular imagination in Ireland (though Yeats had hoped for more of his poems to by “sung” by the people there); but it is not in traditional ballad form. Vendler asks us to listen for the “missing” foot that brings a slight pause to the end of each successive line. I would like to look at these stanzas to appreciate the sheer detail and variety of narrative information in the second stanza, as well as extra-human revery of the third stanza and the searching philosophical reasoning in the final stanza. Not to mention the power of the refrain, “All changed, changed utterly: / A terrible beauty is born.”

I have met them at close of day

From counter or desk among grey

I have passed with a nod of the head

Or have lingered awhile and said

And thought before I had done

Of a mocking tale or a gibe

To please a companion

Around the fire at the club,

Being certain that they and I

But lived where motley is worn:

That woman’s days were spent

Her nights in argument

Until her voice grew shrill.

What voice more sweet than hers

When, young and beautiful,

She rode to harriers?

This man had kept a school

And rode our wing`ed horse;

This other his helper and friend

Was coming into his force;

So sensitive his nature seemed,

So daring and sweet his thought.

This other man I had dreamed

He had done most bitter wrong

To some who are near my heart,

Yet I number him in the song;

He, too, has resigned his part

In the casual comedy;

He, too, has been changed in his turn,

Hearts with one purpose alone

Through summer and winter seem

Enchanted to a stone

To trouble the living stream.

The horse that comes from the road,

The rider, the birds that range

From cloud to tumbling cloud,

Minute by minute they change;

A shadow of cloud on the stream

A horse-hoof slides on the brim,

And a horse plashes within it;

And hens to moor-cocks call;

Minute by minute they live:

The stone’s in the midst of all.

Too long a sacrifice

Can make a stone of the heart.

O when may it suffice?

That is Heaven’s part, our part,

To murmur name upon name,

As a mother names her child

When sleep at last has come

On limbs that had run wild.

What is it but nightfall?

No, no, not night but death;

Was it needless death after all?

For England may keep faith

For all that is done and said

We know their dream; enough

To know they dreamed and are dead;

And what if excess of love

Bewildered them till they died?

I write it out in a verse—

And Connolly and Pearse

Now and in time to be,

Wherever green is worn,

Anyone who has read the news and reflected on the heroism or insanity of acts of ultimate sacrifice in the name of an ideal we may not—cannot—share, will be moved, must be moved, by “Easter 1916”.

None of the poems here, with the exception of Tom o’Bedlam’s ballad, uses the traditional quatrain form, or a traditional ballad form. These are just some possibilities for a three beat or a 4-3-4-3 ballad line, devising our own stanza and rhyme schemes within those beat patterns. I haven’t discussed rhyming here. If you don’t have a rhyming dictionary—Oxford U. Press has a good one—you can find a serviceable on-line dictionary of rhymes.

You may be wondering why no relevant work by our contemporaries, work published in any number of literary journals, is included here. Our contemporaries may distract us from our true goals by inserting a powerful, sometimes irresistible intermediate goal, that of shining–even out-shining!–our peers. In this way we can be lead—I would say “mislead”—into being poets and creating poems simply for the sake of Being Poets and enacting that ideal. A more worthy goal, and our own hearts’ desire, is to bring meaning into our lives and the lives of our readers, and to illuminate a small corner of the human condition and predicament.